The problem with this argument is the fact that many people discuss it without having sufficient knowledge. SMP techniques can be compared to tattooing, which is why they are often referred to as tattoos.

There are many similarities between Scalp Micropigmentation and standard tattooing.

SMP is considered a simple hair tattoo because of the following reasons. A handheld device that is fitted with a microneedle can be used to administer both SMP and tattoos.

Both of them implant pigment beneath the skin’s outer layers. Your epidermis is the first layer of skin. The second layer is called the dermis, which is where the pigment is implanted for both procedures.

Finally, implanted pigment creates an indelible mark, although it will fade differently depending on how deep the tattoo is. The SMP mark looks like a hair follicle. With tattooing, it can be anything you want it to be.

What are the Differences Between Scalp Micropigmentation and Standard Tattoos?

How are they applied?

When you do scalp micropigmentation, the technique is more detailed and shallower than traditional tattoos. In order to avoid a blowout, which refers to ink spreading underneath the skin’s surface after being applied, there is less contact with the needle and less pressure is applied on the scalp.

What tools are used?

The tools used also differ between SMP and regular tattoos. Traditional tattoo artists use a tattoo coil machine while a digital rotary machine is used for SMP. The needles for both procedures are different. A different type of needle is needed to create a piece of art like a traditional tattoo and a different one is required to replicate something like natural hair.

What type of pigment is used?

The pigment is the third thing that differentiates one procedure from the other. Those who perform SMP use carbon-based ink while others use an iron oxide-based pigment. The techniques used to apply the pigment are different, too. 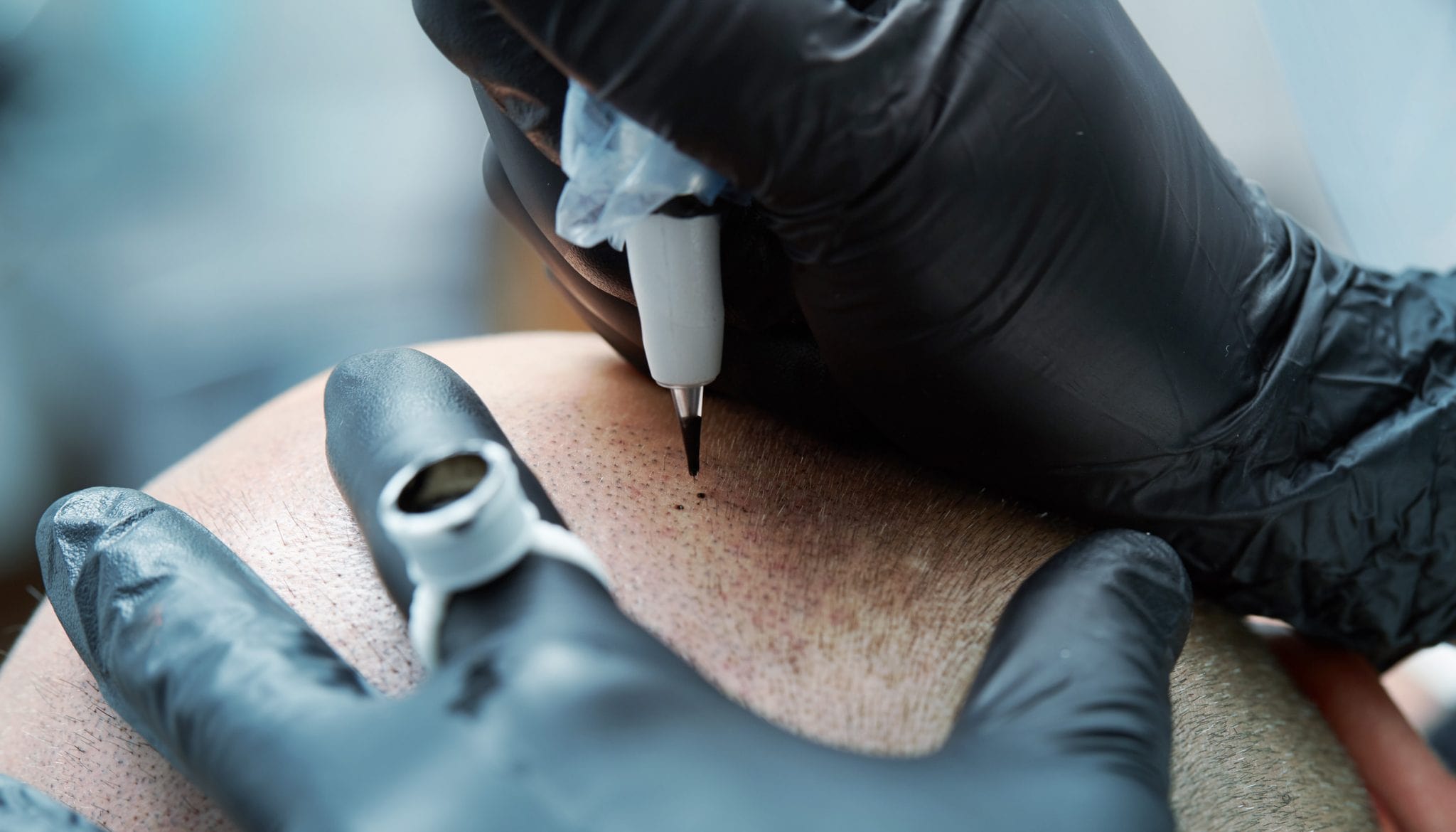 The way that it fades is another difference between scalp micropigmentation and the tattoo process. Because of the different types and applications of pigment, scalp micropigmentation fades more naturally than traditional tattoos. Most people have seen tattoos turn slightly green or blue over the years. With SMP, the pigment used and the application method will have a huge effect on how it fades.

Is SMP as painful as a traditional tattoo?

Scalp micropigmentation doesn’t hurt as much as tattoos. Scalp micropigmentation actually isn’t painful, which is surprising to many people. The idea of a needle being inserted into the skin would seem like it should be painful. However, that’s not always the case. But keep in mind that people have different pain thresholds. What may be painful to some may not be for others. Most people fall asleep in the first 5-20 minutes and then go back to sleep for the rest of the procedure. It’s extremely relaxing, and the result is nowhere close to traditional tattoos.

Scalp micropigmentation may be considered as a tattoo. But don’t let that put you off from giving it a try. It’s a perfect solution for hair loss problems. It helps you regain your self-confidence and it makes you look and feel good about yourself.

Hair loss is difficult to deal with. A lot of people will do anything to find a remedy for it. Luckily, you have the option to get scalp micropigmentation.

Welcome back to Head 2 Head, where we are back to discuss important issues (aside…

Copyright Scalp Provoco 2019 - All Rights Reserved.
Back To Top
×